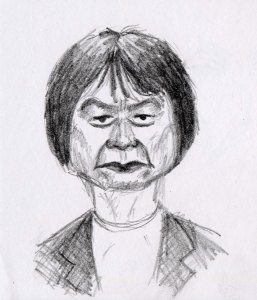 Speaking onstage at Apple’s hotly anticipated special event in California last night, Mario creator Shigeru Miyamoto has insisted in a flat monotone that the forthcoming Super Mario Run for iPhone is his favourite thing, adding, “Wow, great, thanks a bunch.”

A fixture at Nintendo since 1977, Miyamoto is almost solely responsible for elevating video games as an art form and galvanising the industry in the 1980s. He is behind some of the most revered franchises ever created, including Zelda, Donkey Kong, and Mario.

But Nintendo has faced growing difficulties since the arrival of Apple’s iPhone, when it emerged that consumers will play literally anything as long as it’s free.

Reading from an autocue and pausing occasionally to collect himself, Miyamoto grudgingly revealed that Super Mario Run will have many exciting features and will be fully playable in half-hearted 20 second bursts one-handed on the train while players listen out for their stops.

“I have always followed my dreams,” Miyamoto quietly intoned in summary. “My love and passion for this medium allowed me to bring Mario into the world, and seeing him now on the same platform as Flappy Bird, Google Hangouts, and that face-swapping app gives me feelings that are both profound and utterly indescribable.”

Super Mario Run will be available in 2017.