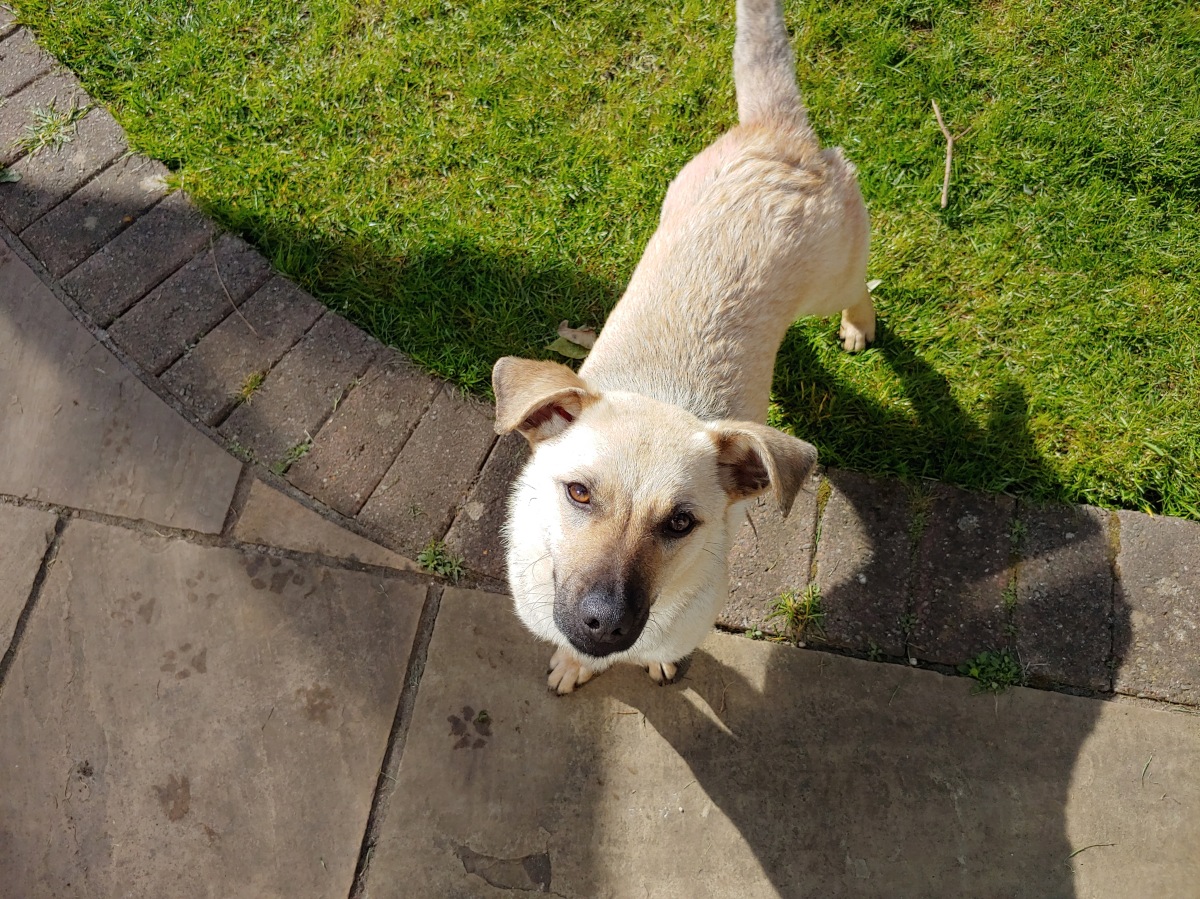 Jelly is an underused name for a dog. It’s short for Angelica, and it’s the name we gave to the affectionate, troubled animal that we adopted earlier this year, partly to fulfil a pledge to our two daughters and partly to give our other dog, Ralph, a companion for life.

Jelly is a cross-breed of unfathomable provenance, rescued from the streets of Romania. She’s pretty, with a long, lean torso, a delicate, black-muzzled face, and a dainty way of standing, with her paws angled outwards like a ballerina’s feet.

When we first took her home she was shy and uncertain, making no sound and barely moving in her cage. But she quickly grew more confident, rolling onto her back, play fighting with Ralph in the garden, and pressing herself against us for cuddles and scratches.

Sometimes there was a jealous dimension to these manoeuvres. Jelly couldn’t stand it when we showed Ralph affection, and would hastily interpose herself between us whenever she witnessed this outrage, shouldering her rival aside.

We had been told that we should treat Ralph, the resident dog, with greater reverence, feeding and praising him first. So that’s what we did, pushing Jelly away by the chest and making her wait, shoving her off the sofa whenever she had the temerity to hop onto it, and generally subjecting her to a more onerous regime than Ralph had ever experienced. It felt like an odd way to treat the youngest and newest member of our family, and we didn’t keep the favouritism up for long.

Meanwhile, more troubling patterns of behaviour emerged. Play fights between Ralph and Jelly started escalating into savage snarling brawls, and games of chase reliably ended up with Ralph under the sofa, yapping at Jelly while she yapped back at him. He was always trying to make the game end.

We worked out how to curb most of these behaviours, with the help of a professional. Jelly hunted Ralph on walks, pressing herself to the ground like a lioness stalking an antelope before scrambling and striking, so we kept her on the lead. Solved. Whenever Jelly started pulling her power-moves on Ralph, we stepped between them and loomed over her until she sat down in a gesture of compliance. Solved. Most of our strategies worked, but not all of them.

Over time Ralph and Jelly started largely to ignore each other, even when they were doing the same thing, standing in the same corner of the garden, barking at the same unseen dog on the other side of the fence. They regularly shared a sofa, or laid together on my office floor, back to back like jigsaw pieces, but the wholesome play fighting of their early days didn’t last.

In most respects, Jelly is a wonderful dog – obedient, affectionate, enthusiastic, intelligent, and eager to please. She’s much better than Ralph at most of the things a good dog should be good at, like walking calmly on the lead, waiting for permission to eat, and maintaining a respectful distance at the front door. When I placed their food bowls in front of them, Ralph’s nose always hovered a couple of inches above his dinner while Jelly sat erect, her head cocked, a model of respectful restraint.

In August we went away, leaving Ralph and Jelly together in a single cage at the kennels. I outlined their occasionally tempestuous relationship to the kennel owner, and asked that they be separated in the event of a fight. She suggested that they might become closer over the fortnight, echoing my own unspoken hope.

When we picked Ralph and Jelly up after our holiday the kennel owner had nothing to report, and it seemed she might even have been right. For a week or so after that our dogs were settled. There wasn’t much warmth between them, but no fighting either.

But their truce was short-lived, and after a particularly explosive fight we realised that we couldn’t go on.

My wife had been pressing to rehome Jelly for weeks, but I had always resisted, feeling that she wasn’t beyond redemption, that we had a duty to her, and that we had a duty to our children too. This had the effect of making me Jelly’s de facto champion, an attachment that was amplified by Jelly’s clear preference for me. Being loved is even more dangerous than loving.

It seems incredible now, but I didn’t like Jelly much at first. I had an overpowering loyalty to Ralph and a strange aversion to Jelly’s wiry, unfamiliar, un-fluffy, un-Ralph-like presence. There was something unlovable about her bullish neediness – the way she couldn’t stand the sight of Ralph receiving affection, the way she would nudge my hand with her wet nose to make me keep stroking her whenever I stopped.

But in the end she became my favourite. I spent so much time watching her, thinking about how to manage her, and interacting with her that this switch in loyalties was inevitable. But it was also, I’m sure, because of her. I could call out from anywhere in the house and Jelly would come running. She bristled with affection and delight. I feel I can say that Jelly loved me, and I hope she knew in some way that she won me over completely.

I wish I could explain myself to Jelly. I wish I could say sorry, not just for letting her down but for all the times I was impatient and unaffectionate. I wish I could let her know how much it hurt to give her up, and that I didn’t do it lightly. If she could have watched me sobbing as I signed her over, she might have understood, but by then she had already been led out of sight.

It’s going to be okay.