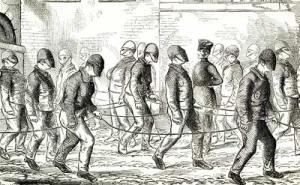 In a boost for Theresa May at the G20 summit in China, the Australian government has indicated that it hopes to invest in the UK after Brexit by turning the island into a penal colony for Australian criminals.

“We welcome the opportunity to do business with the UK,” said a spokesperson for the Australian government, “and the clearest opportunity in our view is in the custodial deportation industry, which played such an important part in our own rich history.”

Geographically isolated from the European mainland and beset by perpetual dispiriting drizzle, Great Britain has long been a favourite candidate for the incarceration of foreign rapists and prostitutes, but the historically strong pound has deterred investors.

However, in a move that is likely to enrage Brexit voters concerned about immigration, the inevitable catastrophic fall in the value of sterling after Article 50 is triggered is widely expected to be followed by an influx of foreign paedophiles and murderers as other sovereign governments seek to make the UK a penal colony.

A spokesperson for the government’s newly formed Brexit department was unavailable for comment.