Warning: this post contains spoilers for Good Will Hunting, Rushmore, Dean Spanley, Telltale’s The Walking Dead, True Detective, Inside Out, and Manchester by the Sea. 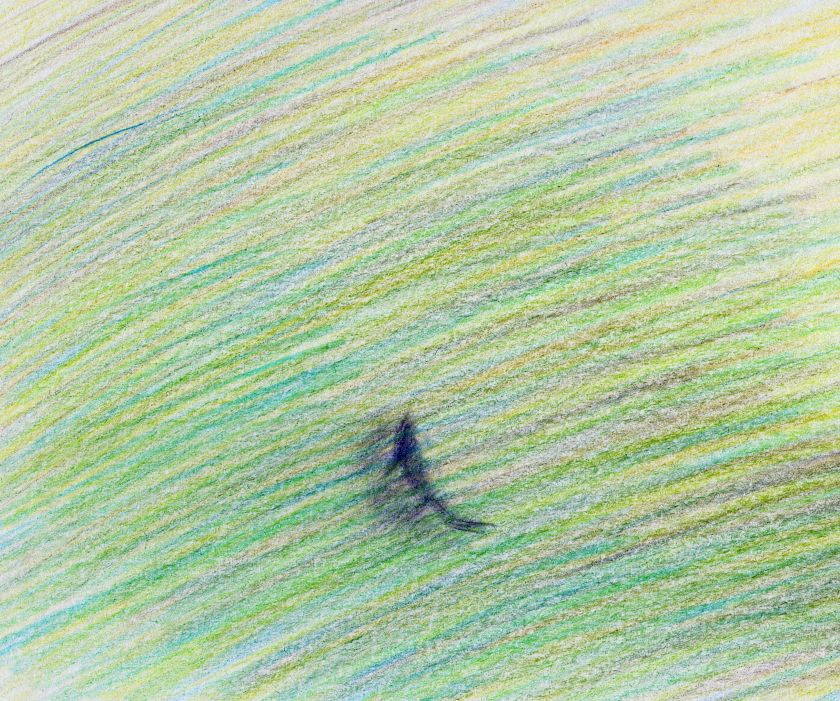 When I was 14 my dad died suddenly of a heart attack.

I didn’t go to the funeral. I didn’t cry. I was too weird, angry, and repressed. I wondered later whether it was strange that I hadn’t grieved, but I figured it just came at the wrong time. I was too consumed by adolescent madness.

I pushed my grief down and now it lurks in me, like a shark. I never know where it is, but I’m pretty sure it can’t get out, and I don’t want it to. Even if I could de-shark myself, as though it were an abcess I could drain, which is another of the things it feels like, I wouldn’t, because this is all I’ve ever been and I don’t know how being fixed might change me.

After watching Manchester by the Sea a couple of weeks ago, and then enduring the massive bout of crushing melancholia this duly triggered, I realised that throughout my life certain films, television programs, and even videogames have got under my skin, by which I mean I couldn’t stop thinking about them after watching or playing them.

Having something get under your skin is different from just being emotionally affected by it. Kramer vs Kramer affected me, in that it seriously bummed me out. Ditto Awakenings, Room, and The Road, but none of these films got under my skin in the way that Manchester by the Sea did.

The stories that have managed to get under my skin, as opposed to just bumming me out, are mainly, but not entirely: Good Will Hunting, Rushmore, Dean Spanley, Telltale’s The Walking Dead, True Detective, Inside Out, and Manchester by the Sea.

Four of these came after I had children, and it’s pretty obvious that their ability to get under my skin had a lot to do with parenthood. It’s much easier to get under my skin now. The Walking Dead is all about looking after a little girl. True Detective is about a man whose daughter died. Inside Out is about a little girl going through a traumatic life experience. Manchester by the Sea is about a man whose children died in a fire. It’s possible that if I had watched Kramer vs Kramer and The Road after I had children they would have got under my skin too.

But I don’t think so. In all of these examples, parenthood just intensified the effect, in the same way that religion seems to intensify, but not cause, enmity towards others. Being a parent has made me more anxious and emotionally vulnerable, but that has only helped stories to do their work. Good Will Hunting, Rushmore, and Dean Spanley were able to get under my skin without the emotional accelerant of parenthood, so clearly there’s an objective, qualitative difference between stories that get under my skin and stories that merely bum me out, above and beyond the presence of sad children.

For the sake of brevity, I’m not going to give a synopsis of any of the films, games, and TV shows I’m about to discuss, so if you haven’t seen or played them you won’t know what I’m talking about.

The bit of Good Will Hunting that gets under my skin is, obviously, the bit where Sean tells Will that it’s not his fault.

See this? All this shit. It’s not your fault.

The bit of Rushmore that gets under my skin is when he’s introducing his play at the end.

This play is dedicated to the memory of my mother, Eloise Fischer. And to Edward Appleby. A friend of a friend.

The bit of Dean Spanley that gets under my skin is the ten-minute flashback at the end in which Dean Spanley describes the final hours of his previous life as Horatio Fisk’s beloved childhood dog.

I am put in memory of my son, Harrington. That is all.

The bit of The Walking Dead that gets under my skin is when Katja realises that Duck has reached the end of his life and Kenny, having been steadfastly ignoring the subject, finally concurs.

The bit of True Detective that gets under my skin is when wheelchair-bound Rust tells Marty about his near death experience.

And beneath that darkness there was another kind – it was deeper – warm, like a substance. I could feel man, I knew, I knew my daughter waited for me there. So clear. I could feel her.

The bit of Inside Out that gets under my skin is when Joy and Sadness get back to the command centre and Sadness takes control of the console.

I know you don’t want me to, but I want my old friends, and my hockey team. I want to go home. Please don’t be mad.

These examples all use the same story technique, though in different ways. I call this technique ‘grief sharking’, and this is how it works.

First, at the outset of the story, or scene, the author establishes that a character – usually the protagonist – has grounds for grief. Then the story goes on to deal with other business that ostensibly has nothing to do with that grief. It disappears under the surface and swims out of view, reappearing only occasionally as a vague troubling shadow, before leaping out of the water and emotionally savaging the audience in the final act.

The technique is used in different ways. In True Detective, perhaps the greatest feat of narrative misdirection on this list, the grief shark barely makes an appearance in eight hours of television. In episode one, while drunk, Rust tersely reveals to Maggie over dinner that he had a daughter, but that she passed, and Marty raises this shock disclosure with him later by way of offering consolation. Much later, while being interviewed by two detectives, Rust mentions his daughter again, this time apparently trying to persuade himself, within his own pessimistic philosophical framework, that her death was a kindness.

I think about my daughter now, you know, what she was spared. Sometimes I feel grateful.

Other than that, she doesn’t really make an appearance until the final scene, when Rust discards his ultra-sceptical worldview and describes with wonder the moment he encountered his daughter’s soul in the anteroom to the afterlife, before dissolving into tears.

In an instant, every word that Rust has said throughout the preceding eight hours of television, his obsession, his nihilism, his rage, reveals itself to be a symptom of grief. The sceptical mindset he adopted was a way of containing that grief. The whole time he was on screen he was just really, really sad and really, really angry, and everything he did was a result of those emotions.

True Detective is an epic demonstration of highly disciplined grief sharking, but it can take place in a much smaller frame. In Telltale’s The Walking Dead it happens within a single sequence. First, Duck is bitten by a zombie. Then, he becomes ill. Then you spend some time walking around solving puzzles, while Duck’s father, Kenny, stoically refuses to contemplate the implications of Duck’s infection.

The sickly boy being comforted by his mother Katja is a raw wound in the chapter. I found myself looking away whenever I had to cross that bit of scenery, not really thinking about it but hoping on some level that Kenny was right, and, more prosaically, that Telltale wouldn’t kill off a child whom the player had got to know.

So when Katja said to Kenny, “It’s time,” I completely fell to pieces, precisely because up to that point I had been ignoring my grief. It was a grief shark, and it bit me in half.

The authors of Rushmore and Dean Spanley take a different tack, distracting you from the grief shark with whimsy. Early in both films we learn that a close relative of the central character has died. Then for much of the remainder of both films we enjoy a quaint story in which the protagonists develop strange obsessions, before those deaths resurface amid thrashing and blood in the final act.

In Rushmore, Max spends most of the film embroiled in a farcical love triangle with a teacher and a middle-aged man, but when he eventually takes to the stage and dedicates a play to his mother, Eloise Fischer, and to Edward Appleby, a friend of a friend, we come to understand that his infatuation with Miss Cross was never romantic. He just misses his mother, and wants her to be proud of him, and he mistook his craving for something else. (Side note: Wes Anderson uses grief sharking in a lot of his films. One of them, The Life Aquatic, is literally about a grief shark. See if you can think of any more examples of Andersonian grief sharking!)

In Dean Spanley, bereaved brother Henslowe Fisk spends the majority of the film trying to acquire dessert wine in order to coax a dean into admitting that he used to be a dog belonging to Henslowe’s father, Horatio Fisk, making him a brother of sorts. It is only when he succeeds in this enterprise in the presence of his father, who has so far exhibited indifference over the loss of his son, that we see what Henslowe has been getting at. Listening to an account of the final hours of his beloved childhood pet, Horatio is put in memory of his son – a place he has hitherto resisted being put. Dean Spanley leads us into the water and the grief shark lunges.

Inside Out uses a different approach. Instead of submerging grief it hyper-articulates it, showing us not only the outer effects but also the internal processes that underpin these effects. In shark terms, it uses a high definition underwater camera and GPS tracking beacon. Through the exploits of Joy, Sadness et al we know exactly what’s going on in Riley’s head as she copes with the double-loss of her childhood and previous happy life. It’s as if there’s a whole school of grief sharks on the screen, painted in primary colours and performing tricks.

Except that’s not what’s happening at all. The exploits of Joy and Sadness are just a colourful, mostly happy distraction. Nobody is at the controls, and Riley is numb. When Sadness finally puts her hands on the console to bring about the simple spectacle of a little girl in distress, the real grief shark breaks away from its rainbow school of decoys and rips your head clean off.

I think stories get under your skin when they articulate feelings that you can’t properly articulate to yourself. The story leads you down a neural pathway and into a mental chamber that you can’t, or won’t, find on your own, and it stays with you until you find your way back.

Stories containing grief sharks aren’t the only ones that take you into yourself like this. Manchester by the Sea doesn’t contain a grief shark, but it got under my skin more than any other story I’ve experienced. After a few weeks of sombre reflection I think I might even have worked out why, but the reason has nothing to do with sharks so I won’t go into it here.

Obviously, people respond to different stories in different ways. You may be invulnerable to grief sharks, because you’re not insane in the exact way that I’m insane, but you might be insane in a different way and susceptible to another kind of storytelling device. However, I would counsel against crowbarring this device into an animal metaphor and writing a blog post about it, because, as you have just discovered, that would be weird.